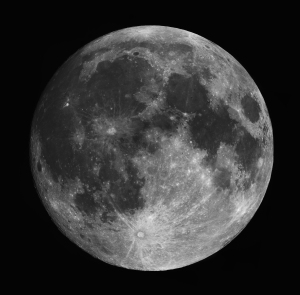 This full Moon image was captured and made by William Chin, based in Kuala Lumpur, Malaysia. Copied from http://www.astronomycameras.com.

As promised, I have delivered. Back in March, I wrote a post about why the popular limestone hypothesis circulating in the paranormal community is, unfortunately, not a valid hypothesis. Limestone will never be a cause of paranormal activity because you need quartz or quartz-like rocks (like granite) to possibly cause a piezoelectric effect to contribute to paranormal occurrences.

So, let’s talk about this and maybe change your mind. Dr. Neil DeGrasse Tyson has pointed out that the only way for our brains to be affected by a full moon would be if our heads were planetary-size. “But our bodies are 80% water! OF COURSE the moon has a gravitational tidal affect on our bodies!” The main difference, though, between our bodies and the ocean is that the ocean is an open body of water and the water in our bodies is closed. The moon has no gravitational tidal effect on water in water towers and yet we’ve never sat around and debated this. In fact, as the late astronomer George Abell once noted, a mosquito landing on your arm has more of a gravitational effect on your body than our own moon. Last time I checked, no one blames their actions on errant mosquito landings.

In addition, new moons – the period during moon phase cycles when the moon is at its darkest, or not visible – have as much gravitational pull as full moons and yet no one equates behavior or paranormal activity to new moons. This could most likely be due to something called illusory correlation. This basically means that we will sometimes associate two things together that in reality have nothing to do with one another. Let’s take into account the following graph:

We’ve all heard of the many ideas put forth of what may or may not cause autism. Organic foods is not one of those things purported to cause autism. But, if we look at the above graph, it clearly shows a rise in sales of organic foods over the course of a decade along with the rise in autism diagnoses. Looking at this, you could say that one is the cause of the other.

But, you would be wrong.

Illusory correlations exist because our minds have a propensity for recalling certain events over other non-events. In other words, you’re going to remember an odd event that occurred during a full moon and not, say, during a waning crescent. We will remember that 20 drunks were arrested during last month’s huge full moon because we noticed that giant orb and we told others about it and this helped to reinforce the memory.

I know some of you really want the full moon to be the cause of something besides beautiful night skies. Well, here you go. Researchers at the University of Basel in Switzerland, led by Christian Cajochen, have found that full moons CAN affect your sleep patterns. Even when placing the study participants in rooms with no windows and no access to lunar phase records, researchers found that brain activity related to deep sleep was reduced by 30%, that study participants took five minutes longer to fall asleep, and overall they slept 20 minutes less.

Could THIS validate “full moon lunacy?” Not really. Probably only if you are already suffering from a psychological disorder, for example schizophrenia, then less sleep could cause a psychotic break. But, from the paranormal investigative side, it makes sense that you as the client may experience more paranormal activity during a full moon because you’re suffering from less sleep and therefore awake for a few more minutes, and aware of your surroundings. Has the activity increased? No, but your perception of activity has.

So, where might the idea of “full moon lunacy” come from? Psychiatrist Charles L. Raison of Emory University thinks that before early man made structures in which to live, when our ancestors lived and slept outside, they were much more affected by the light of the full moon than we are today. Even though our sleep cycles may notice a 25-minute loss three nights a month, our ancestors could have lost several nights in total each month. And those latent psychological disorders most definitely would have come to the forefront and given rise to early “werewolves” and “vampires” and “lunatics” and many other monsters of the night.

Paranormal Georgia Investigations will continue to collect moon phase data with each investigation we perform and, I’m sure, we will note increased sleeplessness in our clients, not more ghosts in their homes because of it.

Disclaimer: This is a public blog/forum. If you comment here, anyone who comes to this site will be able to see your comment. Comments are not deleted unless they are spam/offensive. If you have private information you don’t wish the public to see, do not put it in your comment. Comments on this website are the sole responsibility of their writers and the writer will take full responsibility, liability, and blame from something written in or as a direct result of something written in a comment. The accuracy, completeness, veracity, honesty, exactitude, factuality and politeness of comments are not guaranteed. In other words, don’t comment with your email address, physical address, or phone number. If you do so, we cannot be responsible for any spam/crank calls you may receive. Think before you comment. Please.